The pretext for this directive was to increase literacy, but literacy rates in Hong Kong and Taiwan are slightly higher than those of Mainland China despite that their administrations never adopted simplified characters, and never limited the number of characters in use.

From the standpoint of language, the simplification program was a much more ambitious cultural atrocity than the Taliban dynamiting the Bamiyan Buddhas and the campaign of the First Emperor of Qin, to “Burn books and bury scholars.” It was more extreme than censorship because it not only restricted expression, but also, to a degree, it restricted the ability to conceive certain ideas.

For artists, it was a further calamity because imposed simplification desecrated our most indigenous and distinctive art form: calligraphy. Of course some people still practice calligraphy in simplified characters, but this is a calligraphy divorced from millennia of developments that enabled the form of characters to reflect their semantic content and vice versa.

In my work, I have used simplified characters, but I have mixed them with “lost” characters no longer in use or prohibited by simplification. These are made to appear as though printed, but each is painted by hand with a brush rather like traditional calligraphy. In these works, the arrangement of the characters has no lexical or semantic relation. Instead, their relationship is entirely formal. At the same time, these works divest the simplified characters of the propagandistic role for which they were intended, and return to them a formal aesthetic. Another way of saying this is that one can return a formal aesthetic to simplified characters, but only by eliminating their lexical and semantic relations. Ultimately, this is also to return to Chinese characters their critical role, but entirely through formal artistic means. 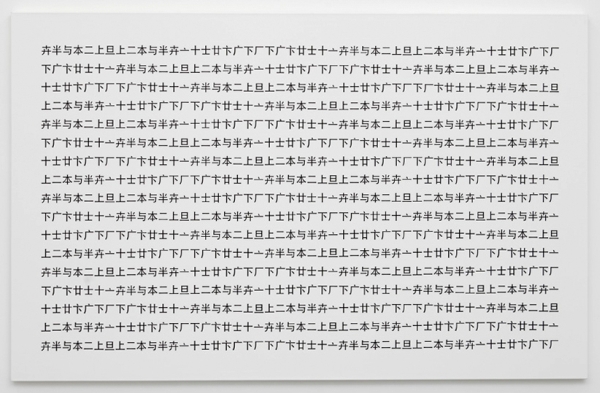