A project by Jia for Rohkunstbau XXII: Between the Worlds

Background of the Project and Why These Left-Behind Children

Throughout the developing world, rapid industrialization has yielded ever more acute disparities in the geographical distribution of income and employment opportunity. In China alone, this has given rise to the greatest internal migration in history, from rural areas to urban centers: approximately 400 million people since 1979. The depletion of population in rural areas only accelerates the very conditions that lead to migration.

Children are the casualties of this condition even more in China than in other countries. This is especially the case because of the Family Registration or Hukou System of legal domicile, advanced by the government since 1958. Each Chinese national is issued a family registration document that, in effect, binds that person to his or her birthplace for many social services. This means that the children of internal migrants cannot accompany their parents to cities because without a new local hukou registration, the children would not be able to attend school in the new jurisdiction.

The domicile issue has given rise to the phenomenon of “left-behind children” whose numbers exceed sixty-two million in China. In the absence of one or both parents, most are left in rural areas to be raised by grandparents. Others simply care for themselves, with an older sibling assuming the parental role, until the younger children are ready for boarding in local schools—if such facilities are available.

Not surprisingly, left-behind children are subject to higher rates of developmental problems, depression, and educational challenges. They are also more vulnerable to human trafficking, and other forms of exploitation. Chinese law does not prohibit parents from leaving children under the age of twelve at home unsupervised. This fact contributes to higher rates of juvenile injury and even fatality.

But there is one class of left-behind children who are guaranteed never to see their parents again. This is because their parents have died as casualties of economic and social conditions in which outmoded legislation has been complicit. Sometimes, these deaths are isolated results of accidents due to insufficient enforcement of safety standards.

In the case of the children of the Yi ethnic minority in Sichuan Province, these deaths of parents have occurred en masse as a consequence of the narcotics trade, through overdose, hepatitis, and HIV infection. Despite the poverty of the Yi, and strict anti- narcotics laws in China, a variety of conditions conspire to make illegal opiates available to this group. One factor is geography. The lands of the Yi of southwestern Sichuan province are buffered by a narrow section of Yunnan from Myanmar’s Shan State, the largest opium-producing region in the world until it became second to Afghanistan in the 21st century.

The difficulty of the terrain, the transportation challenges it imposes, and the consequent lack of adequate primary schooling has another consequence that condemns the eight million Yi people to poverty. The Yi languages comprise six mutually unintelligible variations of a Sino-Tibetan language related to Burmese. In the absence of adequate primary schooling, the Yi most often do not learn Chinese. By language alone, they are further marginalized and excluded from any jobs that require basic Chinese language skills.

Like the poor and marginalized in many countries, many among the Yi, through temptation, coercion, or perceived necessity, fall prey to the narcotics trade, an affliction that leaves a disproportionate number Yi children orphaned.

As exemplars of the most severely marginalized among the Left-Behind Children, the Yi orphans are an appropriate focal point for this work.

Ubiquitous in both rural and urban areas of the developing world, Mini-shops are ad hoc micro-stores that spring up without regard to legal controls, in places where zoning regulations, fire codes, structural codes, and other building safety codes are non-existent, or unenforced by virtue of the sheer need for distribution outlets for goods—generally for those too poor to afford to buy such goods, were the costs of code-compliant retail distribution outlets passed on to the consumer. In this sense, Mini-shops are businesses run by the poor, and serving the needs of the poor.

Each mini-shop is a Zwischenraum in several senses. Their status is neither wholly legal nor wholly illegal. They entail both globalization and the assertion of the local because they often sell globalized brands such as Coca-Cola, but the mini-shops themselves have nothing to do with globalized retail store brands such as 7-Eleven. They might occupy the same site for generations, but without land title or rental agreement. Or they might be swept away overnight, after paying rent to a landlord whose rights might also be vulnerable to revocation. For the families that operate them, they impose an existence that often enables them to survive, but never to save enough to transcend their condition, a Zwischenraum stalled between poverty and advancement.

1a) Significance of the Mini-shop for Children in China

But for children, especially children in China, the mini-shop most often is wondrous place between the worlds of school and home. I know this from my own experience when my parents left me to be raised by my grandparents in the countryside. The mini-shop is the first stop after school, a place where the children can become masters of their own time, free of authority and obligation. It is a place where wonderful snacks, candy, or toys present themselves, often at prices that even poor children occasionally can manage— especially if they share. Alone or with friends, children look forward to a visit to the mini- shop as the most delightful respite of their day. For them, the mini-shop is a site of fantasy, the fulfillment of desires, and of the joys of friendship. Mini-shops are the sites of beloved memories of a Chinese childhood that often has few joyful memories to rival it.

Mini-shop is a partnership with the children of the Liangshan Orphanage School in Sichuan, China, an orphanage and school whose children are of the Yi ethnic minority, those whose parents have become casualties of the narcotics trade originating in the Golden Triangle opium poppy fields of nearby Myanmar.

At Rohkunstbau, Mini-Shop presents a structure that resembles a real mini-shop of the region, the sort whose configuration and stock especially appeals to the delights of children. But its stock will primarily comprise art works made by the children of the orphanage and objects precious to them.

The children are to select these works and objects from among those they most prize, in order that their contribution should constitute a gratuitous act of love. Receivers of the exhibition will be allowed to take an artwork or object, with the understanding that they also contribute something they truly prize, regardless of its monetary value—no money will be accepted. The viewing public shall also know the children by story texts that correspond to each object contributed, and also through documentary footage of the children.

After the close of the exhibition, the artist will take objects contributed by the Rohkustbau public back to the children at the Liangshan orphanage, along with documentation of the exhibition to show them.

For the cultured public, the experience of visiting an exhibition in a space for viewing art entails many attributes that parallel the Chinese schoolchild’s visit to a mini-shop. The exhibition space is, for the adult, a place to experience the imagination and aesthetic pleasures, outside or between the more “real” sites, often fraught with obligation, of work and home.

As installation, Mini-shop makes explicit this parallel in a way that implicitly transforms the receiver into the child at the mini-shop, albeit with objects of desire the adult is more likely to be able to apprehend.

Since nothing is for sale, and neither can the practice of the Mini-shop be barter, a word whose very etymology roots it in deception for personal advantage, instead, Mini-shop transfigures the site of commoditized monetary exchange transactions into an empathic mirror that mutually reflects two disparate geographies, cultures, ages, and desires.

Rather than a representation, Mini-shop aspires to serve as a communicative medium of this empathy through both literal and symbolic exchange rooted in love—which, after all, is what the children really most desire, and what they most need. 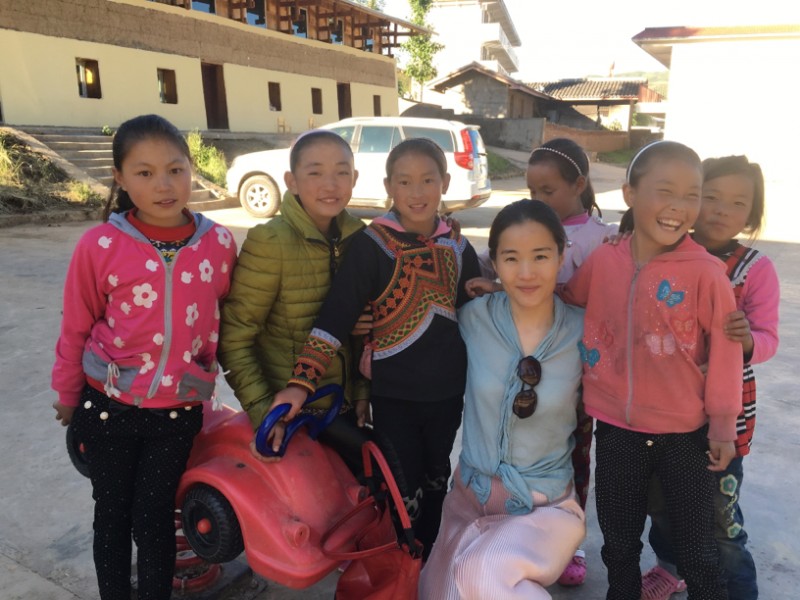